Rockfield have been involved in modelling various aspects of Nuclear Burial for over 25 years but we start this blog with a bit of background.

Like all industries, the generation of electricity produces waste. Whatever fuel is used, the waste produced in generating electricity must be managed in ways that safeguards human health and minimizes the impact on the environment.

Radioactive waste is not unique to the nuclear fuel cycle. Radioactive materials are used extensively in medicine, agriculture, research, manufacturing, non-destructive testing, and minerals exploration. Unlike other hazardous industrial materials the level of hazard of all radioactive waste – its radioactivity – diminishes with time.

LLW is generated from hospitals and industry, as well as the nuclear fuel cycle. It comprises paper, rags, tools, clothing, filters, etc, which contain small amounts of mostly short-lived radioactivity.

HLW arises from the 'burning' of uranium fuel in a nuclear reactor. HLW contains the fission products and transuranic elements generated in the reactor core. HLW accounts for just 3% of the volume, but 95% of the total radioactivity of produced waste.

Final disposal, or permanent disposal, is a final stage of the nuclear fuel cycle.  Final disposal is unavoidable and common for all the strategies of nuclear fuel cycles, despite the reduction in waste volume and radiotoxicity with current or future reprocessing techniques. The last step is the final disposal of the waste and whether it is untreated spent nuclear fuel or vitrified high-level waste arising from fuel reprocessing, it is still necessary to safely store them for the long-term until its radioactivity reaches safe levels. Generally, this comprises of interim storage followed by final disposal.

After a minimum period of 50 to 100 years of interim storage, spent nuclear fuel must be transferred to a final disposal facility. Currently, the preferred option is a deep geological repository, which is an underground emplacement in a stable geological formation. Crystalline rock (granite, welded tuff and basalt), salt and clay are the most suitable formations for geological disposal. High Level Waste, however,  is directly disposed of in a storage facility without being put through any chemical processes, where it will be safely stored for hundreds of thousands of years until its radiotoxicity reaches natural uranium levels or another safe reference level.

Waste repositories are engineered barrier systems comprised of the stable host rock formation, tunnel lining, low permeability layer (usually bentonite due to its swelling characteristics), low diffusion layer which all surround a reinforced concrete pit. The nuclear waste is then stored within the concrete pit in canisters or steel boxes encased in mortar. The multiple layers of the repository barrier construction are to maintain the structural integrity of the repository and to prevent the ingress and egress of groundwater thereby preventing environmental contamination. Radioactive waste must be contained for many thousands of years if human and environmental issues are to be averted.

Utilising our software, Elfen fm and Elfen Advanced, the whole lifecycle of radioactive waste can be simulated. From the evolution of the host rock and the effects of tectonic movement, fault slip and seismic events through to excavation of the facility and the subsequent effect of degradation on either the whole facility or the individual containers themselves. The following sections provide a snapshot of some of Rockfield’s modelling work through our 20 plus year involvement in the burial of nuclear waste.

Fault slip within the host formation

Rockfield have investigated the impact of a seismic wave due to a seismic event at a depth of 500 – 1000m in the vicinity of a disposal site. Variations in the fault angle and fault slip together with the effect of the corrosion rate of the steel canister were considered. Corrosion of the waste canister coupled with shearing due to fault slip may sufficiently reduce the canister strength such it no longer acts as a barrier; shearing may also result in a preferential pathway for groundwater through the bentonite layer. Modelling, therefore, allows us to assess the integrity of both the canister and the bentonite over the duration of the lifespan of the facility and to assess whether the waste is effectively contained. A low permeability layer is typically included in an engineered barrier system to prevent the ingress and egress of groundwater. Ingress of groundwater can accelerate the corrosion rate of the steel canisters whilst the egress of groundwater may pose an environmental threat. Bentonite is often used in the construction of the low permeability layer due to its low hydraulic conductivity and its swelling properties which enable it to seal construction-caused joints and rock fractures. Additionally, it is sufficiently plastic to absorb rock movements and to redistribute pressure homogeneously. Rockfield have investigated the catastrophic collapse of the reinforced concrete pit to assess the development of preferential pathways through the bentonite layer. 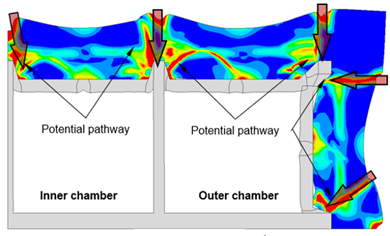 Ingress of water can result in accelerated corrosion of steel components within the facility. Corrosion of this steel results, not only in a reduction in the steel strength and load carrying capacity but also expansion of the rebar occurs. Rust typically occupies 3-4 times the volume of virgin uncorroded steel. This expansion can have a dramatic impact within the reinforced concrete pit. The reinforcement embedded within the RC pit expands which induces tensile forces to develop that can result in the fracturing of the concrete component. The evolution of the fracture density and apertures of the RC pit of a HLW repository has been modelled using the Elfen software.

Figure 4. Fracturing of the RC pit

Corrosion and deformation of the waste containers

The nuclear waste is placed in canisters or boxes, depending on the type of radioactive waste, prior to placement within the repository. The canisters or boxes are essentially the last line of defence of the engineered barrier system of a waste repository. The steel boxes can be 5cm thick with both canisters and boxes having lids welded which must remain watertight to maintain integrity. The boxes and canisters are constrained from outward deformation within the RC pit due to surrounding containers. Consequently, the degradation and expansion which occurs due to corrosion of the steel results can sometimes result in an inward buckling. Rockfield have assessed the impact of the percentage fill, stacking arrangement of the containers and the corrosion degradation and expansion upon the containers ability to remain watertight over the lifespan of the facility.

Figure 5. Corrosion and deformation of the waste containers

Rockfield have significant experience in modelling burial facilities for nuclear waste whilst capturing all the relevant physical, chemical and geological processes that may occur over tens of thousands of years. The benefits of using Elfen are:

We hope this new technology will be of great interest and value to your business. If you are simulating problems within one of the application areas we’ve mentioned or you’re facing a different challenge that we can help with, then get in touch.

Share your thoughts by dropping us a line at john.cain@rockfieldglobal.com