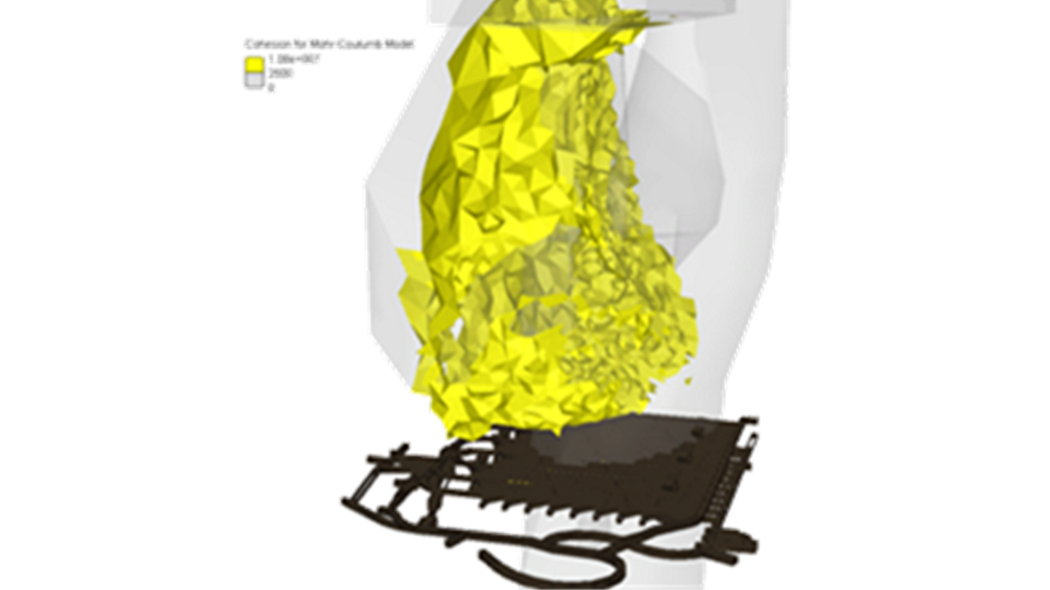 Block caving is a mining method that relies upon natural forces to break the rock. The cave is initiated by an undercut where a large area beneath the mining block is removed; gravity induced stresses then develop within the rock, causing it to fracture. The fracturing process is progressive and affects the entire rock mass overlying the undercut. To allow the cave to propagate, broken ore material has to be removed via the  drawbells on the extraction level. The fractured rock gravitates through the drawbells to drawpoints on the production level from where it is transported to the haulage level and out of the mine. 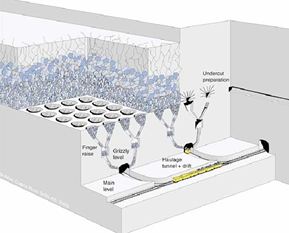 Components of a block cave

The block caving method applies to massive orebodies that dip steeply and have a large lateral and vertical extent. For the method to be successful, the rock mass must cave and break into manageable fragments. Fragmentation of the orebody occurs within distinct regions within a continuously propagating block cave. Duplancic and Brady (1999) proposed a conceptual model of a propagating block cave which can be characterised into five zones: Cave mining refers to all mining operations where the orebody has caved naturally after undercutting and the caved material is recovered through drawpoints. Caving is the lowest cost underground mining method for large near-vertical orebodies provided that the drawpoint size and the handling facilities are tailored to suit the caved material.

The economic viability of a block cave and its productivity levels are dependent upon the degree of primary fragmentation that occurs within the seismogenic zone. Factors which affect this include:

This is where numerical simulation comes in to its own; it offers the advantage of running a multitude of scenarios of different rock properties, in-situ fracture definitions or undercut stratgies and assessing the production rate, and therefore, the economic viability of the mine.

Rockfield have over 20 years involvement in modelling of block caving operations using Elfen. The targeted ore body, rock formations and mine infrastructure can be incorporated into the Elfen model.

Fragmentation and fracturing of the ore body is a key concern, therefore any simulation must accurately represent this process. The in-situ natural fractures of the rock formation and ore body can either be represented by a) a planes of weakness continuum approach or b) explicitly representing the fractures via a discrete fracture network (DFN).

Undercutting is achieved by the gradual removal of the rock at the undercut level which induces a stress change within the ore body and rock mass above. Tensile failure of the rock may occur such that a new fracture develops or an in-situ fracture propagates. Note that Elfen is physics driven and any new fractures are determined solely by the stress regime. These fractures occur in the roof of the cave, within the seismogenic zone, above the propagating cavern. On a previous study, the seismogenic zone correlated well with the recorded on-site microseismic activity.

Progression of the seismogenic zone and recorded microseismic events

The fractured rock falls in to the muck pile or caved zone for extraction via the drawpoints. Development and progression of the caved region can be monitored within Elfen. If the caved region does not track the ore body or stalls, alternative undercutting strategies can be readily explored  to improve the efficiency and economic viability of the block cave.

Progression of the caved region

Block caving is all about the understanding of the primary fragmentation within the seismogenic zone. That may be the development of new fractures or the propagation of existing in-situ fractures. Elfen has a multitude of tools to assess the fractures including density, orientation, area and dominant set. Assessment of the primary fragmentation is key to understanding the cave progression and, therefore, the economic viability of the mine. Elfen provides a full understanding of the stress regime, deformation, seismogenic zone, particle size prediction and production profile that results from the excavation of block or sub-level caves. The features and benefits include:

We hope this proven technology will be of great interest and value to your business.  If you are simulating problems within one of the application areas we’ve mentioned or you’re facing a different challenge that we can help with, then get in touch.

Share your thoughts by dropping us a line at john.cain@rockfieldglobal.com.